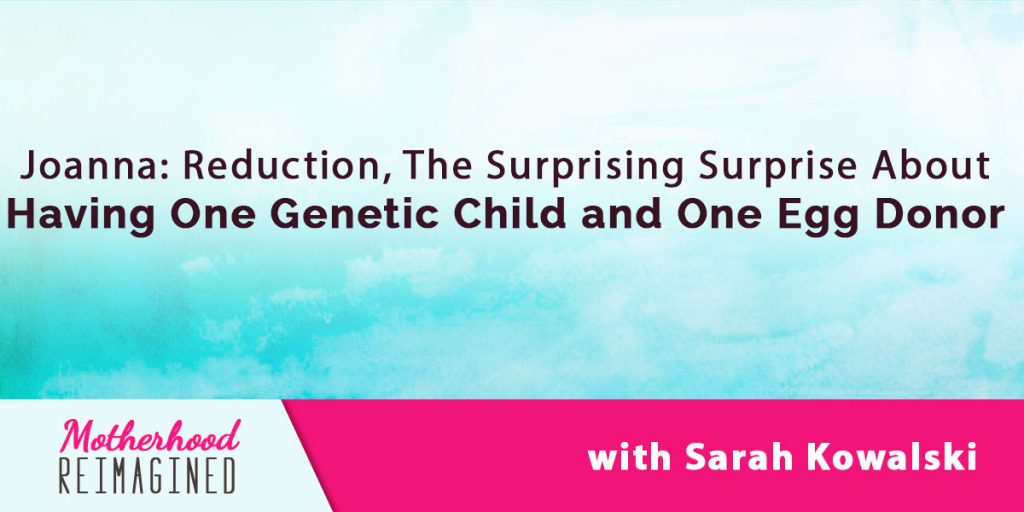 Joanna is a single-mother-by-choice who conceived two children, one with her own eggs and the other with a donor’s eggs. As an only child having more than one child was very important to Joanna. She tells me about the process of conceiving her first child, and the painful decision to reduce her pregnancy when genetic issues were discovered with one of her twins.

There is a blessing about being able to do a lot of things before you have kids. Now all I do is kid stuff, I don't do grown-up stuff, but I did grown-up stuff for forty years. - Joanna Click To Tweet

We discuss the differences between children and how the genetic connection plays into it. Joanna explains what she enjoys about parenthood and what she dislikes, her answers are honest and inspiring to anyone considering an alternative path to motherhood.

If you have one child and are contemplating trying for a second, Joanna’s story will encourage you to weigh your options and make the right decisions for you.

I was tired of the needles I think I had 3 sharps containers of needles at that point. I remember thinking, I just want someone to hand me a baby, and I do not care where it comes from. - Joanna Click To Tweet

One of the things about having kids late is I had a lot of friends who also struggled with getting pregnant and two of my closest friends had to do multiple rounds of IVF. I couldn't muster up a lot of pity for myself.- Joanna Click To Tweet

Thank you for joining us for Motherhood Reimagined. You can contact us through the website or Twitter, Pinterest, Instagram, and Facebook. I am currently looking for guests for the show so if you have an alternative path to motherhood, I’d love to talk with you!  Also, Tribe is live! So check it out and connect with women who are exactly in your shoes and can relate. Please join us for our next episode when we talk to another inspirational mother!