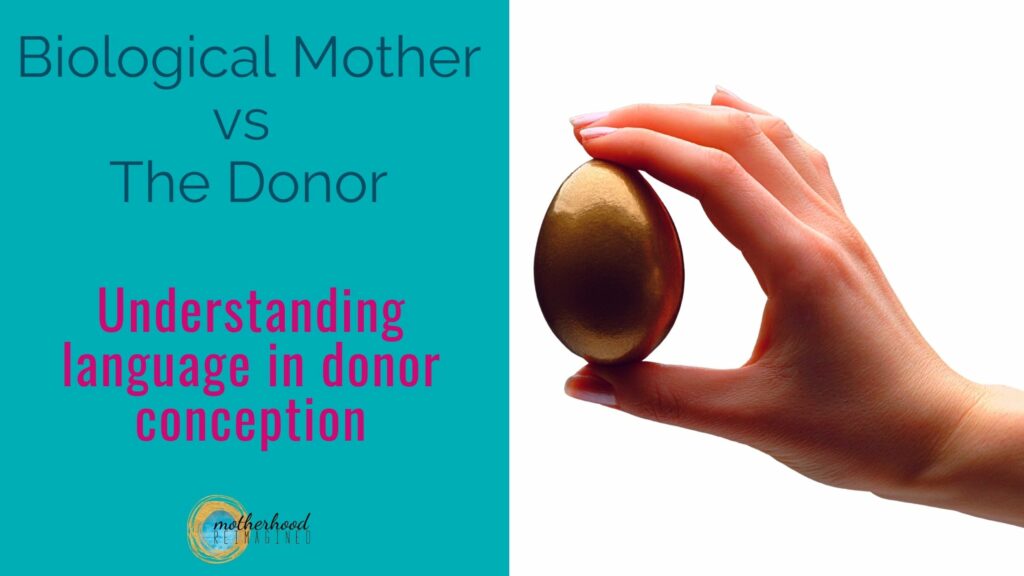 Do you know someone that has a child via sperm or egg donation? Or maybe even via both sperm and egg donors? Or even a surrogate? If so, it’s likely that this is an entirely new concept for you. Maybe you are wondering how to refer to the donors or the woman raising this child? This article will explain the difference between a biological mother and a child who was conceived via egg and/or sperm donation.

As reproductive technology improves and single motherhood and same-sex families become more common and accepted, people are constructing new models of families that include blended families, divorce, co-parenting, donor conception, surrogacy, adoption and the list goes on. It’s becoming more and more common for people to encounter an array of family structures and origin stories.

It’s important to be sensitive to what language and terminology you are using so that you can be sensitive to the concerns of the birthing parent and most importantly the child. But the bottom line is that you should never call any of the donors “mother” or “father.”

Did you know that when someone gives birth to a child via sperm or egg donation, the birthing mother is considered the biological mother? The donors are simply that, DONORS. The baby was grown inside the birth mother who provided all the nutrients and building blocks to grow the child.  Yes, the child does have DNA from others but that alone does not make the donor a mother or father.

You might be very curious about the donors. And, it might be tempting to refer to them as the mother or father. But it’s important to remember that the donors provided the genetics only and are not the parents. It will be harmful to the mother and the child not to honor this distinction and refer to the donors as the Mom or the Dad.

A good framework is to think about how you would explain it to a child.

Love makes a family.  And the people who raise you and love you are your parents.

This framework is powerful because it separates the egg and sperm donors and even the gestational carriers from the person who will be doing the hard work of raising the child day in and day out.

A New Understanding of Genetics

Epigenetics is one branch of the multidisciplinary field of fetal origins. Epigenetics is a relatively new field in the study of human inheritance, The term refers to long-term alterations of the DNA that don’t involve changes to the DNA sequence itself but that cause variations in expression of the genes.

Now scientists understand that DNA is not a template that produces identical copies of the same thing. The genes still need instructions for what to do and where to do it. And the epigenome, which literally means in addition to, or above, the genome, is responsible for these instructions.

Here’s an analogy that can help. Imagine that DNA is a script that can be interpreted differently. Just think of all the interpretations of Shakespeare’s Romeo and Juliet, from the 1954 movie directed by Renato Castellani to the modern-day version starring Leonardo DiCaprio and Claire Danes. The various productions and movies started with the same script and yet produced entirely different productions. So, too, with DNA: the same genetic code can yield very different outcomes. The genetic code itself doesn’t change (or mutate). Instead, epigenetic changes are responsible for the differences. And, the biggest influencer of these epigenetic changes is the uterine experience and early childhood. (if you want a deep dive into the concept of epigenetics and other fascinating discoveries, read this article).

Because of this, a mother via egg (and/or sperm) donation, does not serve as simply an incubator for the baby, but instead exerts influence over her baby’s genetic expression. An information pamphlet on egg donation from Freedom Fertility Pharmacy states the following:

“The most important aspect of all pregnancies—including egg donation pregnancies—is that as the fetus grows, every cell in the developing body is built out of the pregnant mother’s body. Tissue from her uterine lining will contribute to the formation of the placenta, which will link her and her new child. The fetus will use her body’s protein, then she will replace it. The fetus uses her sugars, calcium, nitrates, and fluids, and she will replace them. So, if you think of your dream child as your dream house, the genes provide merely a basic blueprint, the biological mother takes care of all the materials and construction, from the foundation right on up to the light fixtures.”

Because of technology and our increased understanding of genetics, the concept and language around family has evolved. It can be hard to keep up.

It’s also true that the baby and mother exchange cells throughout the pregnancy which can be found in a mother’s brain 18 years later, leaving a permanent imprint in the mother’s tissues, bones, brain and skin. According to the research of  Hina Chaudhry, “When pregnant, the cells of the baby migrate into the mother’s bloodstream and then circle back into the baby, it’s called “fetal-maternal microchimerism.”⁠

Chaudhry’s research has also shown that if a mother’s heart is injured, fetal cells will rush to the site of the injury and change into different types of cells that specialize in mending the heart. The baby helps repair the mother, while the mother builds the baby.

The Child’s Well-Being Is The First Priority

The best policy is to ask about what terminology anyone in your life that has used a donor or surrogate would like to use so that you can honor their wishes. This honors the family and prevents confusion for everyone.

The woman who birthed a child via egg donation has already had to grieve the loss of her genetics. But once her baby is born, I can tell you from experience that she will not doubt herself as “the mother” for one second. Yet, hearing others refer to the donor as “the mom” will feel devastating all the same.

More importantly, however, is the child’s well-being. They are the most important person in this equation. If you don’t use appropriate language, you could be conveying shame onto the child because you don’t honor how they came to be. If the child hears you saying something different than he/she has been told by his parent, they will wonder why, feel doubt, and even shame. It’s important that they grow up feeling proud and special. And, you can do your part by using the language that the mother (or father) is using.

Even if it feels weird to you, you owe it to the child to honor their origin story! Start using the correct language when the child is a baby so you have time to get used to it before they can actually understand what you are saying.