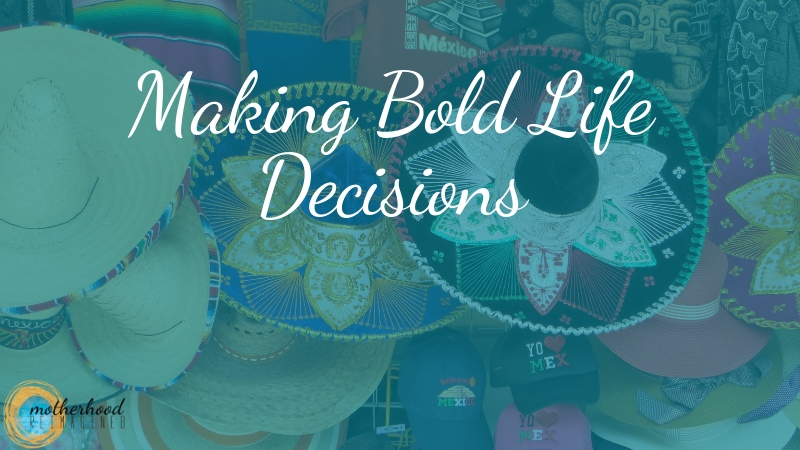 What do you do when you really want something, but you’re not sure you can pull it off? Like those big, bold life choices, should you become a single mother by choice, quit your job or travel the world with your child? Do you get put off by the enormity of the decision, feeling like it’s too much to figure out?

I’ve been thinking about this a lot lately because of recent huge life transition. It takes me back to the days when I first started contemplating whether I could ever be a single mom by choice. The choice to be a solo mom and the road to get there was incredibly intense. But I’d made it and was a few years into raising my son alone when a new dream that initially seemed impossible came to me.

In the summer of 2017, I sat in my living room in Oakland. I was about to press send on my first preschool tuition bill for my 3 year old son, which rivaled a year of state college tuition. I wondered to myself: did I really want to pay this money which would make me feel stressed and strapped for cash?

An idea popped into my head–I should move to Mexico with my son. I’d always loved Mexican culture and had even conceived my son in a Mexican fertility clinic and my son had a fair amount of Mexican heritage. I wanted him to be not only bilingual but bicultural. Not to mention, I’d always been a traveller at heart. It all pulled me to Mexico. I imagined us playing in the crystal blue warm water of the Yucatan, eating street tacos and learning spanish. Ahhhh.

But then my mind snapped back to all the responsibilities of my current life. I was up to my ears in a book launch. And I glanced over at my lovely, but high maintenance dogs. UGH. I could never pull it off. The thought of figuring out the details just made me tired. So, I reluctantly pressed send on the preschool tuition and put the idea out of my head.

I found myself having the same conversation with myself again in early 2018, when our preschool sent out contracts for the Fall 2018 school year. (It’s funny how something niggles at you when you really want something). Again, my stomach sank when I thought about paying close to a college tuition for another year of preschool and another year passing that my son would not learn spanish. I let the idea percolate some more.

That’s when I saw a rental ad for a similarly sized house in Oakland, at a price I couldn’t believe possible. Could I rent my house for that much? If I could get that rent for my house and eliminate preschool costs, I would breathe a massive sigh of financial relief.

But wait, the dogs! There’s no way I could make a move happen with them. I wouldn’t be able to fly them in crates. And I assumed driving would be way too dangerous. And even if I figured out how to get them there, I had heard horror stories of trying to finding housing in Mexico. The only other option seemed to be rehoming them–and that was a non starter for me–completely out of the question. So, I tried to once again table the dream.

But this time, instead of giving up, instead of becoming overwhelmed by the things I assumed would make it impossible to move, I took some baby steps towards researching bringing dogs to Mexico.

I started by calling a friend who I knew had taken a dog to Mexico. “It’s easy,” she said. “You just have to get a health certificate. There’s no quarantine.” She then explained how she had driven to Mexico several times and that it was actually an easy, safe drive. Possibilities  immediately started bubbling up. When I hung up the phone, I jumped on craigslist and did a search for houses in Mexico that allowed pets and voila-many gorgeous, affordable houses popped up. Then I found some Facebook groups dedicated only to driving in Mexico and posted a million questions.

Things were starting to seem possible. And now I had the momentum to explore a myriad of options. I researched flying with dogs, paying a driver to drive my car and dogs, hiring a moving company, visas and residency, schools, not to mention what town to move to in Mexico.

I won’t lie, it took months of research and planning. But, long story short, I slowly overcame every roadblock. On August 16th, I set off driving for San Miguel de Allende, Mexico, with my two dogs, my son and a good friend who was willing to accompany us on the drive.

Getting my life packed up, renting my house, figuring out the logistics of temporary residency and bringing my dogs and car to Mexico was by far the biggest project I have ever taken on in my life. I’m good at lists and managing big projects but this was well beyond anything I’ve ever tried to do.

For months, I leaned on friends like never before (more about what’s it’s like to call in a million favors as a single mom in the future). I dropped a million balls, made some pretty big screw ups. Like forgetting a piece of paper for my car that almost caused the border agents in Texas to send me back to California to retrieve it! Since I wasn’t about to drive 4 days back the way I came, I stood my ground and after about 2 hours of arguing in broken Spanish, I convinced them to let me go without the paper.

Getting settled in hasn’t been a walk in the park. When I arrived in Mexico, I thought I’d be back to business as usual within two weeks max. But then my backpack got stolen with all my car keys inside, money, sunglasses, reading glasses etc. My son’s eye mysteriously swelled shut for several days, we battled Montezuma’s revenge regularly, took several trips to various government agencies to finalize our residency for not only my son and I but my car as well, found more black widows and scorpions in the house than I care to mention and I’ve spent countless hours wandering aimlessly around the grocery store week after week wondering what to buy — feeling like my ability to meal plan or cook had completely evaporated in this new world of different ingredients and a miniscule kitchen. But I’ve never once regretted the choice to move here to Mexico.

It’s been a little over two months and I’m finally feeling more grounded. I’ve made amazing friends, hired a cook for $15 a day to cook a week’s worth of food for me, taken care of tons of paperwork, and had a blast celebrating Dia de los Muertos over the long weekend. I’m enjoying a slower life–one where I stop to talk to friends on the street and don’t feel rushed about the next thing I should be doing, and instead focus on creating a connection with the person standing in front of me. A life in which people actually have the time and energy to be an amazing friend. Once again I’ve found myself leaning on people for just about everything, but feel warmed by the generosity of people who want to help me get settled and know what’s it’s like to move your life to a new country. And most importantly, I’ve taken a massive sigh from the financial relief Mexico has afforded me. Just for starters, instead of paying a fortune for preschool, I’m paying $150/month.

The entire process took me back to all the hard times I had deciding to whether to become an SMC and then deciding to use an egg donor. There was so much to research between the financial concerns, estate planning, fertility enhancement, cycle tracking, IUI’s and fertility treatments. I specifically remember being stuck on using a sperm donor. I just couldn’t fathom it and the research seemed too daunting. Not to mention the sleepless nights, the spit up and diaper blowouts that I handled alone and the countless decisions required every day as a single mom. But just like the joy I am now feeling about living in Mexico, I count my blessings about having a child alone and practically laugh at the parts that seemed impossible when I first hatched the idea of being a mother on my own.

Living in Mexico could have passed me by if I’d stopped exploring the idea when it felt difficult to figure out how to bring my dogs. I could have succumbed to the exhaustion that overcame me when I first started to think about all the hurdles I’d need to overcome to get here. But instead, I took those baby steps to test my assumptions and luckily got proven wrong about it being an insurmountable issue.

If you want something, or you think you want it, don’t dismiss the idea or give up. If you’re wondering whether to take the leap in any aspect of your life, be bold when thinking about what’s possible. Take those first baby steps to explore the possibility, find out what it entails, what it costs, etc. Talk to people who have done it. Keep asking questions and taking baby steps when it feels impossible. And most of all, don’t be afraid to take risks. In the words of H. Jackson Brown Jr., “Be bold and courageous. When you look back on your life, you’ll regret the things you didn’t do more than the ones you did.”

Would you like help exploring whether to become a single mom by choice? Whether to move cities, or how to handle aspects of raising a child alone? I’m here to help! Book a complimentary 30 minute session here to discuss your next big thing. Or join us in my Facebook Support Group where I hold mini-training in Facebook Live broadcasts each week.