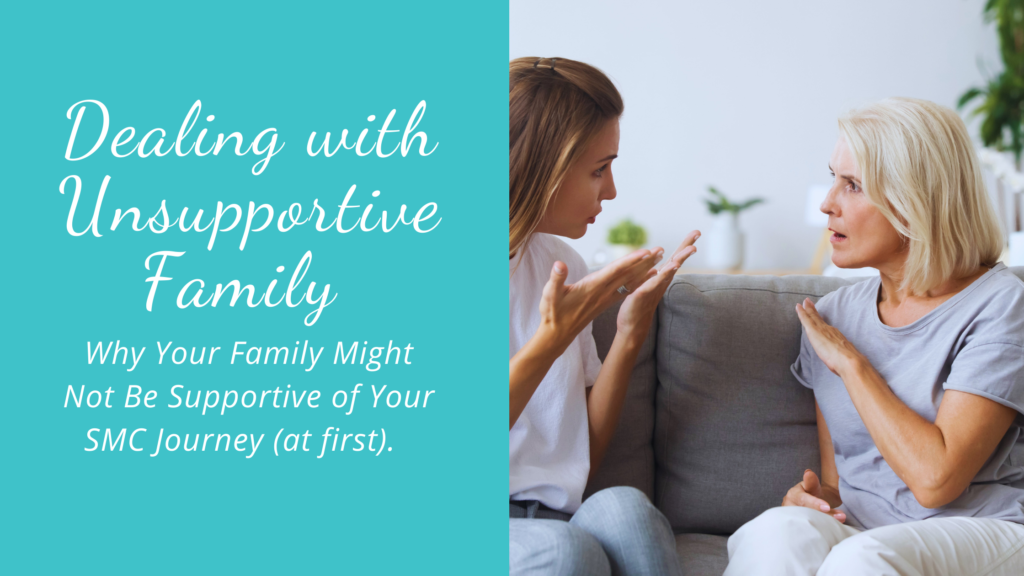 Is Your Family Unsupportive of Your Single Mom by Choice Journey? : 6 Reasons They Might Not Be Excited About You Becoming A Single Mom By Choice.

The good news, they aren’t just trying to be jerks. It’s much more likely that a combination of their upbringing, beliefs about what makes a family, stereotypes of single mothers, lack of knowledge about fertility and their own experience as parents, makes them worried about you.

Let’s dive into the top reasons you might not be getting the enthusiastic response you were hoping for.

1) They are used to traditional ideas of family, and it may take them a little while to get used to the idea.

When a woman reveals that she is considering becoming a single mother by choice (SMC), older generations might not be as enthusiastic about the idea. It can take time for them to warm up and embrace SMC because it flies in the face of everything we know women should want: marriage with children; a beautiful house or even just being able to rely on one man financially. But before you go off thinking “why can’t they just be happy for me,” think through how different and bizarre your choice may seem to them. SMCs are something that older generations have possibly never even heard of.

2) They think it’s harder to raise a child alone and don’t want you to suffer.

You are probably already feeling the weight of responsibility for your future child and have thought long and hard about whether you can handle it. It’s not a choice you’ve made lightly.

Your family only wants the best for you. They are worried about your future and don’t want to see you struggle financially or emotionally in any way. They likely believe that raising a child alone is significantly harder than raising a child alone and so they are unsupportive of your choice to be a single mother by choice.

I seriously question whether that’s true. From my vantage point, raising a child alone is harder in some ways and easier in others. Who’s to say which is actually easier (though in my opinion, I think it might be similar or even easier alone.)

But your family and friends have only had one dominant model of what parenting is supposed to look like, so they automatically believe that raising a child alone must be much harder.

They also fear you will struggle financially, and this is a burden they don’t want to see you go through alone. Of course, raising a child on one income isn’t easy, but it doesn’t mean it can’t be done.

3) Many people don’t understand the facts about waning fertility, so they think you have time to wait.

Many women go through life thinking they have plenty of time to find the right partner, get married and start a family. They don’t realize how much fertility wanes with age. So if you wait too long then it might be impossible for you to conceive naturally. Heck, I was unaware of just how much fertility wanes after 35, so much so that I had completely pushed the question whether or not I wanted kids to the deep recesses of my brain.

It makes sense. The media feeds us tons of images of women pregnant in their later 40s without mentioning the struggle they went through to conceive, or concealing the use of egg donors. OB/GYN’s spend most of their time helping us not get pregnant, but they rarely educate us on the realities of how hard it can actually be to get pregnant.

So, when your family and friends hear that you want to get pregnant on your own, they too are unaware of the reality. They can’t see why you feel pressured. And because they are entrenched in conventional norms, they just want you to wait a bit more to try to find a partner, but usually, they have no clue about what that means from a fertility perspective–but you do. So, if you hear your biological clock ticking, don’t let others dissuade you from taking action.

4) They carry only negative stereotypes of single mothers rather than understanding the research that one stable loving parent is all you need.

The research is pretty clear. One stable, loving parent is all a child needs, whether it’s two parents or one parent with no partner.

Facts matter. And the facts are that children of single parents do just as well as those raised by married couples in terms of academic success, social development, psychological adjustment and many other markers for healthy development.

So, while society carries some pretty awful stereotypes of single motherhood (and fatherhood for that matter), the facts don’t support those negative stereotypes at all! The reality is that raising a child alone can be done, and it doesn’t have to come with risks or consequences.

But your loved ones want you to wait so you can find the right partner to raise a child with since they believe that it’s better for the child to have two parents. But the truth is they just don’t understand how a stable, loving home with one parent can be all a child needs to succeed.

5) Who knows what choice may lead to a two parent family.

It’s also possible that your family and friends, haven’t thought about the fact that nothing is certain. So, even if you have a baby in partnership, there’s no telling whether that partner will be present to raise your child. And, if you have a baby alone, who knows when you might find a partner who wants to raise your child with you. It’s really impossible to know which choices will lead to which family structure.

6) People can’t help but project their ideas on you.

Let’s face it. It’s almost impossible to take your own biases, life experiences and opinions out of the equation when you are evaluating whether someone else’s life choices make sense.

So, when your family and friends hear that you are planning to have a baby on your own, they often think back to how hard it was to raise kids in partnership and can’t fathom how anyone could willingly do it on their own.

Or they have entrenched religious or other beliefs about what makes a family, which they can’t separate when they look at your life.

They could even have found themselves single not by choice due to divorce or other means, and struggled to come to terms with being a single parent. So they have no idea why someone would willingly choose to do something that caused them so much pain.

The bottom line is that your choice scares them because of their own life experiences and upbringing. It’s very hard to drop that to look clearly at your situation from your perspective.

But the truth is; their ideas about what parenting should look like may not match up with yours. And that’s OK!

Don’t let the opinions of others sway you.

It can definitely feel harsh and disappointing when someone who is close to you seems unwilling or unable to see things through your lens. No matter what it stirs feelings of loneliness and anger when it feels like your family is unsupportive of your single mom by choice journey.

But what’s most important is that you are the one who is living your life. Not them!

The truth is; making this decision does not mean that you don’t want to share your life with someone eventually. It doesn’t mean you don’t believe in marriage or family.

It just means that for whatever reason, it didn’t work out in time, so now is the right decision for you at this point in your life!

The reality is that single motherhood can be done, and parenting alone doesn’t mean your life will be harder or more stressful.