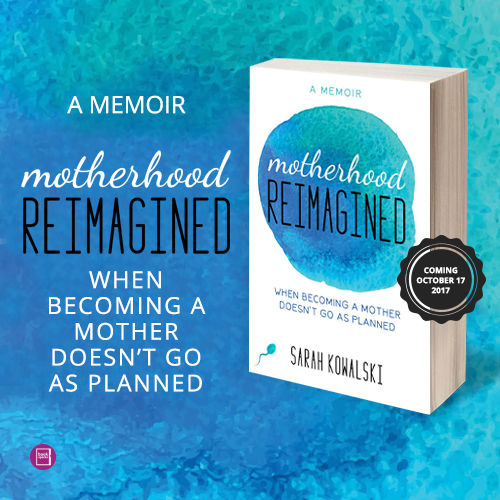 A story of personal triumph, unconditional love and the lengths one will go to experience motherhood

At the age of thirty-nine, Sarah Kowalski began to realize time was running out of time to have a baby. After grappling with what it meant to have a baby alone, she eventually realized that she’d always wanted a baby more than anything and decided to use a sperm donor―only to find out she was infertile. Thus began a year of hope and despair in which she fought the diagnosis, refusing to accept her doctor’s suggestion that she move on to donor eggs. In the months that followed, Kowalski catapulted herself into a diligent regime of herbs, Qigong, meditation, acupuncture, and more in a futile attempt to improve her egg quality. It was only after facing the dormant self-doubt and self-hatred fueled by her body’s inability to conceive that she was able to surrender her previous notions of what it meant to be a mother and embrace a path to motherhood that involved both egg and sperm donation.

A story of personal triumph and unconditional love, Motherhood Reimagined reveals what’s possible when we are willing to put down the version of motherhood we expected and embrace the unconventional.

FOR FANS OF
Art of Waiting: On Fertility, Medicine and Motherhood by Belle Boggs and Avalanche: A Love Story by Julia Leigh
Publisher: She Writes Press
Release Date: October 17, 2017
Paperback ISBN: 978-16211522727
Paperback Price: $16.95

Sarah Kowalski, Esq., is a fertility doula, family building coach, postpartum doula, and author, as well as the founder of Motherhood Reimagined. She is a regular contributor to ESME.com, YourTango.com, and ChoiceMoms.org. As a single mother by choice who conceived her son via sperm and egg donors, she is a go-to guide for women who are contemplating single motherhood, having fertility issues, raising donor-conceived children, or navigating life as single mothers. Kowalski has a BA from UC Berkeley, and she graduated magna cum laude from Santa Clara University Law School in 1998. She left the practice of law to pursue her interests in alternative healing and the mind/body connection by becoming a Guild-Certified Feldenkrais Practitioner, Qigong instructor, and Certified Integral Coach.