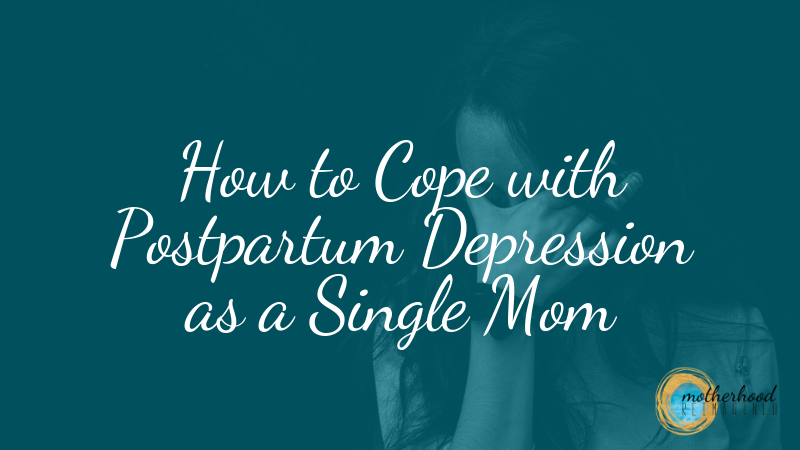 For single moms, coping with postpartum depression can be especially difficult because they don’t have a partner who can share the load of looking after a newborn or spot the signs of depression when it starts to appear. Depending on their support network, they might also lack emotional support.

“One of the things that didn’t reconcile in my mind is that […] this was my lifelong dream to be a mom and here’s an amazing, beautiful, healthy newborn in my hand. And all I wanted to do was sleep and never wake up or I had thoughts of hurting – hurting her, hurting myself – and just making this all go away and not have to deal with it.” – Jackie C

Postpartum or postnatal depression is a real concern for any new mom, affecting up to one in seven new parents. Even adoptive parents can suffer from post-adoption depression–up to 32% in fact.

What is postpartum depression?

Postpartum or postnatal depression is a type of depression that some people experience after having a baby. While many women feel anxious and tearful in the first week or so after giving birth, depression is not the same as the baby blues, which are very common and usually only last for a couple of weeks.

If you have depression, your anxiety and sadness will be persistent and pervasive, to the point that you may be unable to care for yourself and your baby. You may experience a lack of interest in your baby and your life, low energy levels, difficulty sleeping (beyond the usual for parents of newborn babies!), problems concentrating, and very negative thoughts.

Postpartum depression can develop at any point during your baby’s first year of life and can develop gradually.

I recently interviewed two single moms by choice who experienced postpartum depression: Ann, who gave birth to twins, and Jackie, who had a baby girl.

You can listen to Ann’s story and account of her postpartum depression here, Jackie’s story here, or read their advice below.

Jackie explains that postpartum depression was something she was aware of but not something she thought would ever happen to her. She didn’t know much about the impact it could have, emotionally or physically.

When she went for her two-week check-up after having her daughter, she completed the survey she was given as honestly as possible but was surprised when the doctor expressed concern about her answers. Being a first-time mom, Jackie had assumed the way she was feeling was normal and had no idea she actually had moderate to severe depression.

When Ann went for her check-up, she thought the questions like how are you feeling were “very awkward and kind of corny.” She knew the simple thing to do would be to write that she was feeling great but she actually ended up crying as she answered the survey.

While you can be prepared financially and have practical support lined up, it’s quite difficult to prepare for the emotional side of having a baby. The best you can really do ahead of time is know that postpartum depression and other complications are possible and that they could happen to you. Make sure you have a good support network and be prepared to lean on them.

2. Try not to feel ashamed

It’s important to remember that depression is an illness, and a common one at that. It can happen to anyone and nothing you’ve done could have caused it. Having depression also doesn’t make you a bad person and your baby will not be taken away from you because of it.

3. Ask for and accept support, even if you don’t want it

Ann entered motherhood with the attitude of “I’m a single mom by choice. I do not need your help.” She describes her approach as a combination of thinking she was a badass who could do this alone and having made her bed and having to lie in it.

“I didn’t want to imposition anybody,” she says. “I didn’t want other people to have to support me in ways they typically wouldn’t because I made a decision.” She used a lot of self-talk to try to get herself to suck it up: “You can do this. You’ve got this. You don’t need anybody’s help.”

This attitude slapped her in the face in her first six weeks at home with her twins. Among other things, she was struggling to eat. She mentioned to her friend that she didn’t have time to cook. If her friend had offered to cook her some meals, Ann would have said no because she “didn’t need any help.” But instead of asking, that friend went right ahead and cooked and then delivered thirty meals, which of course made Ann’s life so much easier.

She was humbled by the realization that she could not do it all alone and that, even if she could, that was not the optimal way to raise her babies.

She quickly learned both how to accept help and how to ask for it, and now leans on her mum for a lot of support. When people offer to help her now, her attitude is one of “hey, if you’re going to offer.”

“I have this kind of Rolodex of people in my head that I know, if push comes to shove, they would show up,” she says. “I don’t abuse that, but I’m willing now to use that system.”

Ann’s advice is to trust other people to be kind and supportive, even if that doesn’t come naturally or easily for you. “Give people the opportunity to help you to, to be kind, to enjoy this experience with you. Because boy is it lonely alone.”

Jackie gives the same advice. She recommends talking to your closest, safest circle of friends and being as open as you can. If you can afford it, you can hire a night nurse or a mommy helper, or even just arrange for various people to come and visit you so that you’re not alone with your baby all day.

4. Don’t delay in asking for help

It’s important to get help as soon as possible as the symptoms of postpartum depression can get worse over time. There’s no point struggling on and hoping that the problem will fix itself.

Your doctor or health visitor should be trained to recognize the symptoms of the illness and be able to point you in the direction of support. There are a range of approaches that may help, from lifestyle changes to therapy and medication.

One of the reasons Ann reached out to me to speak on the Motherhood Reimagined podcast was because she felt so alone during her experience of postpartum depression as a single mom, as well as during other stages of her journey to motherhood. She’d like other people to be able to search online for stories of people in situations like theirs and find the information they need.

There are people out there who know what you’re going through and who can help you to realize that none of this is your fault or indicative of your abilities as a parent. Seek them out and get the support you need.

6. Remember you don’t have to love the newborn stage

Almost everyone loves babies; we’re biologically programmed to find them cute. So Ann was surprised to find that she really didn’t like the newborn stage. “It’s really fun to hold other people’s newborns–not so much holding them at three o’clock in the morning,” she says. When you’re constantly tired and no one’s thanking you for all your sacrifices, it’s easy to get upset.

“It was very tragic at the time, but I can remember them sitting in front of me in their Rock ‘N Plays and I’m sitting on the couch crying,” Ann recalls. “I remember thinking, ‘who can I call to give them to? What did I do? What did I get myself into?”

“There was that void. I always used to think, ‘oh, people say there’s this void. They’re just crazy people.’ No. It was like this detachment that was interesting.” Ann explains how she cried at everything and then inevitably felt guilty about the way she was feeling. Particularly if you’ve had a hard time getting pregnant, suddenly wishing away everything you wanted so badly can make you feel selfish and ungrateful, which just adds to the emotional load.

Now, Ann can look back at photos from the time her children were newborns and think they were sweet. She sometimes finds herself wishing they were that small again and she is flirting with the idea of having a third child so, in hindsight, it’s not all bad. But in the moment, it can feel neverending and hopeless.

But the newborn stage does end and is followed by a whole range of ages that each come with their own quirks, difficulties, and delights. These days, Ann delights in the “most beautiful little innocent spirits” that are her children. “I don’t even know how to describe it. It’s just the most fulfilling thing now that I have these two humans that I get to mentor. I get to show them life. And the love they give you is amazing. It’s really neat.”

Just because life is difficult now, doesn’t mean it will always be that way.

7. If medication would help, remember your baby will be OK with a bottle

At Ann’s two-week postpartum checkup, she had to fill out a questionnaire about how she was feeling. She ended up crying. When she then saw her doctor, he suggested she try some medication to help combat the postpartum depression. He reassured her that her babies would be fine on formula: “It’s more important for these children to have a mother that can function versus this ‘breast is best’ mantra.”

Ann cried for twenty-four hours at the thought of not breastfeeding her children before calling him and saying he was right. She then pumped all she could until she took her first pill.

Within a day of taking the first tablet, everything had turned around. “It was like, I went to bed one day and woke up the next a brand new person.” Ann acknowledges that this is not a normal response and that it would usually take longer than this to feel the effects but credits the tablets with giving her the little bump she needed to see that life was amazing. In total, she was on medication for six to eight months before weaning herself off.

Postpartum depression is a real and serious thing that you should not try to handle alone. If you recognize the symptoms of depression in yourself, please speak to your doctor about it. But also remember that both Jackie and Ann, as newly single moms, had no idea they were suffering from depression. So, if someone mentions that they are worried about you listen openly and take action to find out. Seeking out support, both practical support from friends and emotional support from those who have experience with the illness, can also take a weight off your shoulders. Just because you’ve chosen to become a single mom does not mean you have to go this alone.