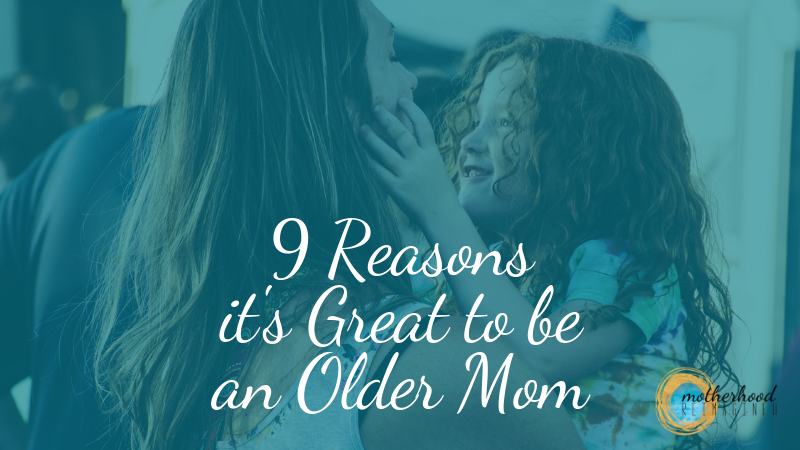 Biologically speaking, the younger you are when you have a baby, the better. But what about after you’ve had the baby? In this post, I’ll share 8 reasons being an older mom is great according to the wonderful women I’ve interviewed on my podcast.

1. Your support network is likely to be stronger

The older you are, the more people you’ve met and the more your relationships have gone through. Friends who have stuck with you until your thirties or forties are more likely to support you through pregnancy and motherhood than all those friends you had in your twenties whose names you’ve long since forgotten.

When I interviewed single mom of twins Ann, she told me she experienced the benefits of strong friendships while struggling with postpartum depression. She was lucky enough to have a friend who cooked and delivered thirty meals for her, unprompted.

Also, the older you are, the more likely it is that your parents have retired. Childcare is expensive; having time-rich grandparents on hand can make a world of difference!

2. You don’t feel robbed of your youth

When you have children young, it can feel like your life is over before it’s even begun. You haven’t done everything you wanted to do yet and now you have a tiny human whose needs must come before your own. As single mom Elena puts it, there are “little spaces of identity that you lose” when you become a parent.

Waiting until you’re older means you’ve had more time to live your own life, so you’re less likely to experience this kind of regret.

Vivian describes this as having had her fill:

“The gift of being an older mom is having these things set up and having financial security and job security and a home set up and having a huge inventory of experiences under my belt that feel like I got a lot of travel and I got a lot of dating and men and I got a lot of spontaneity and sleeping in for 20 years and going to late brunch and spending all day at the bookstore. And all those things that I can’t do anymore. But I had my fill of them […] But I feel like I got a lot. I got my share. And so to spend some time raising my daughter and being really dedicated to that, not only is it fine with me, it’s something I love to do. I’m not like, ‘man, I sure wish I could sleep in some more.’ Like, of course I do. But I also know she needs me. And we’re going to have fun doing now. And it’s a joy to do it. Partly because I think I got so much of the things I wanted for so long, early on in my life.”

3. You’re likely to be in a better financial position

When you’re in your twenties and early thirties, you might still be figuring your career out, paying back student loans, traveling, and saving for a down payment on a home. The older you are, the more likely you are to be past this phase of your life, no longer living paycheck to paycheck, hopefully with a nice healthy bank account to your name.

Being financial secure comes with a whole host of benefits: you can afford more fertility treatment or adoption fees if needed, you don’t need to worry about going broke, you might be able to take a longer maternity leave, and, of course, you’ll be able to pay for more things for you and your child.

Money’s worth having even if you’re not into material things. When Janice spoke to me about being an older mom in the first episode of the Motherhood Reimagined podcast, she told me that being more financially secure meant she was able to afford daycare, a cleaner, and babysitters when she became a mom. Her financial situation enabled her to spend more time with her child and less time doing chores.

4. You’re wiser and have a better perspective on life

The more you’ve lived through, the better an understanding you’re likely to have of the world. You’ll have learned more life lessons and skills and developed more opinions, that will make you a more wise and helpful parent.

In our conversation, Jill told me she doesn’t think she was ready to be a mom at an earlier age. When you become a mother later in life, you’re more likely to be prepared for the challenge ahead.

5. You’ve learned from your friends’ mistakes

Chances are, if you’re in your thirties, forties, or fifties, many of your friends have already have children. This can work to your advantage.

First, you might have been an aunt or a godmother and been able to warm up your parenting skills on someone else’s child.

Second, you’ve seen what parenting is like and what pitfalls it brings, so you have a better idea of what to expect, what not to do, and the kind of parent you’d like to be.

6. Your child might have fewer difficulties and be healthier

A Danish study found that children aged 7 and 11 born to women aged 35 years and above experience fewer emotional, social and behavioural difficulties than other children. This might be because older moms have more stable relationships, are better educated, are better off, are more mature, and are more positive about having children.

Now they’re some pretty nice side effects to having a baby later in life!

According to several studies, if you have a baby in your thirties or forties, you’ve got a better chance of living longer than women who have children earlier.

There are quite a few studies on this topic, although this finding may be a case of correlation rather than causation. For example, it could be that the kinds of women who have children later in life are more likely to be able to afford healthier lifestyles. Still, it’s a nice thought!

8. You know yourself better

The older you get, the better you get to know yourself, your strengths and weaknesses, and the things that push your buttons. You have a better idea of how to take care of yourself and how to get what you want. The more self-aware, stable, and confident you are, the stronger and calmer a mom you’ll be.

One podcast guest, Jill, says, “I can sweat the small stuff better than the old me”. And before becoming a mother, Signe did a lot of mindfulness and meditation courses. She now sees those as training for motherhood: “all the things that I learned, it’s just been prepping me to become a mother.” She now uses the skills she developed every day, staying calm and being centered in the midst of the chaos of parenthood.

Your child will benefit from you being calmer, more confident, and more at peace with who you are. Not only will you be a better role model, you’ll also be a better teacher and a better advocate for your child.

9. It focuses your priorities

Tammy was 46 when her son was born and, since then, both she and her family members have had some health difficulties and she’s been made redundant. All of this has made her very aware of the importance of spending as much time as she can with her son.

She says, “life is short and you can keep doing the grind and do what you think you’re supposed to do and that doesn’t necessarily mean that you’re going to enjoy your life.”

“All I really want to do at this point is hang out with my kid and enjoy my life and I don’t want to take another intense job. I don’t want to do anything right now that takes away from this beautiful gift that I’ve been given.” In order to do this, she’s recently decided to move to Mexico.

Jill credits the gratitude she has for her son to her status as an older mom. She believes she’s more grateful and intentional in her approach to parenting simply because she wanted to be a mom for so long.

Parenting is never going to be easy and there are certainly aspects of motherhood that are harder the older you are. To name just one, Elena and Signe both talked to me on the Motherhood Reimagined podcast about how they don’t have as much energy as they had when they were younger.

But there are plenty of benefits that come with age, as this article has demonstrated. At the end of the day, you get to choose how you see your situation as an older mother. You can choose to dwell on the negatives like a lack of energy and potentially not living long enough to see your grandchildren grow up. Or you can focus on the benefits and choose to believe that everything will work out as it should.

“Sometimes I think, ‘oh, I should’ve done this sooner because I love being a mother.’ But no, it worked out perfectly. I am absolutely happy with the path I took and where I’m at today.” – Janice

Want to hear more wisdom about what it’s like to be an older mom? Be sure to check out The Motherhood Reimagined Podcast to hear the incredible journeys these mothers took to become mothers.