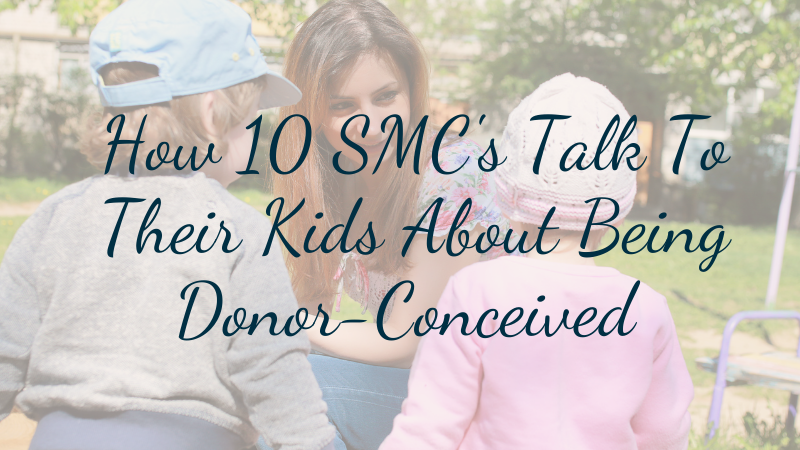 If you’re contemplating becoming a single my by choice (SMC), it’s normal to worry about what it will be like to explain their are donor-conceived using a sperm donor and in some cases an egg donor as well. The latest research suggests that being open and honest allows your child to process the information from a young age and prevent any surprises. It’s just a fact of life from as young as they can remember.

In other articles, I’ve explained the framework that’s most often used to explain the difference between donors and parents. But it can still be difficult to know how and when to bring it up. At what age should you introduce the topic? What will they understand? How should you talk about sperm donors or double donors?

I’ve interviewed dozens of single moms by choice for the Motherhood Reimagined Podcast, many of whom have used egg and sperm donors. In this post, I share the approaches they’ve used to tell their children where they came from.

Research has shown that honesty is the best policy when it comes to donor-conceived children. Indeed, all the women I’ve spoken to have decided to be open with their children. “I think the healthiest thing for [my daughter] is just to know who she is, where she comes from, and for there not to be any mystery or weirdness about it,” says mother-of-one Elena.

CEO and founder of Donor Concierge, Gail Sexton Anderson, supports transparency because it eliminates the possibility of difficult situations in the future, should the truth come out. If it’s a big secret, you risk heartache and the breakdown of the relationship, but if your child has always known the truth, it’s much less likely to become a big deal.

People might think it’s extreme to start talking to your baby about their origins while in utero, but really it’s a great time to start. I know I thought I was completely ok with our story and would breeze through telling my son. But upon the advice of others, I started practicing when my son was in utero. I was completely shocked by how hard it was to get out the story without stalling and wondering what to say next. By the time my son was born, I had practiced enough times to feel like I knew exactly what to say.

Gail explains, “There’s never a perfect time [to start the conversation]….and it just means you keep postponing and postponing and then it makes it harder and more difficult.”  Rather than delaying the conversation, start before your child can even understand. That way, it will always be normal. “It’s just always part of the child’s life. They don’t see it as being anything different.” It also means that even if you are nervous the first time you bring it up, your child probably won’t notice. Over time, it will become something they just know about themselves, rather than an unexpected surprise later in life.

Probably the most important thing is making sure you are comfortable with your story and situation. Single mom of a ten-year-old and a thirteen-year-old Christine agrees that it’s important to own the situation. “I think that the biggest part is that you as a parent have to be okay with your journey before your children can deal with your journey.” When someone asks about your child’s dad, you need to be comfortable responding. If you show that you’re ashamed or uncomfortable, your child will pick up on that and possibly internalize it. “If you accept it, other people will accept it, and your child will accept it,” she says.

Of course, your child will be able to understand different things at different ages, so you need to tailor the language and concepts you’re using to their age and abilities. This is how Janice is approaching the topic with her double-donor-conceived child: “I am telling the truth at the appropriate level that his development can understand.”

You might start by explaining that to make a baby you need an egg and a seed. As your child gets older, you might introduce the idea of the man who gave you his seed. As they get older still, you can use the terms sperm and donor. Of course, this all depends on the terms you’re comfortable using, but Gail advises keeping it simple where possible.

With younger children in particular, it can help to use visual aids and stories to explain mature topics. If you’re a member of the Motherhood Reimagined TRIBE, you’ll find my list of recommended books in the Resources area.

To begin with, I love books that explain that there are all kinds of families.Many use animals to explain how many ways families can be structured. They emphasize that love makes a family.

As the details get more important, pictures and stories about other families seem to create a sense of ease for many children. “I explained it in a really matter of fact way,” says mother-of-two Joanna. “And I got some books and was like, ‘this is how it is in our family’ that was sufficient for him.”

Sometimes, you might need to be prepared to add more than the books provide. One solo mom of twin boys, Brooke, read a book about donor eggs to her children. One child looked horrified and thought the egg donor was his mother.  Brooke had to give more explanation and let her child know that if someone gives you something, it’s yours.

Some mothers prefer to personalize their resources. Signe actually hired someone to illustrate a story she wrote and ended up creating her own children’s book. She then went on to write more books, which her daughter has since taken into school. And other mother’s I know use pictures from their early sonograms and actual life to create a book through Apple or Snapfish. Their children love seeing pictures of themselves and hearing their story of how they came to be over and over again.

Don’t be afraid to talk about the facts of your family in front of others.  And when you do so, make sure you say what you want your child to hear. Worry less about who’s listening and phrase your comments with pride and clarity so that confidence is being modeled to your child.

Brooke’s children have overheard her talking to doctors about their donor-conceived status. If she’s asked if a medical issue runs in her family, she’ll clarify that her family is different from their family because “they’re donor babies.”

It’s similar for Vivian’s daughter. She hears her mom respond to people asking where her husband or her daughter’s dad is with, “There’s no husband. It’s me and my daughter. I had her with a donor.”

Marni realizes she didn’t have any formal conversations with her child about his donor until he was about five. Yet, prior to that she overheard him telling a friend, “I only have a mom. I don’t have a dad. My family’s me and my mom.” He then moved right on to another topic and wasn’t at all fazed. She realized that he had been listening to her casual comments and internalized them.  He was always aware and took his cues about it being normal from her matter of fact and uncomplicated descriptions he had heard on and off over time.

When your child is old enough to pay attention, you can start telling them their story. This can become more detailed over time. Christine used to tell her daughter her story every year on her birthday. It actually became such a normal and mundane part of her life that her daughter grew tired of hearing it!

Some moms also opt to show their kids photos of their donors. Tammy and Vivian have done this, although their children don’t really understand who the people in the photos are. It’s just another good way to introduce the idea of a man who helped you start a family, so it doesn’t ever come as a shock to them.

Another approach – one that Gail recommends – is following the child’s lead by answering their questions and not diving into the full story straight away or over-explaining. When they ask, “Mommy, did I grow in your tummy?” you can say, “yes, you did.” As they become more curious, they’ll ask for more details and you’ll be able to provide them.

A few days after Brooke introduced her son to the idea of donors, he asked what his egg donor was called and if Brooke thought she was special. Brooke answered his questions, he was satisfied, and life carried on as normal. “I let it come out whenever it comes out, whenever the opportunity is there, because I don’t want it to be a thing,” she says.

It’s relatively easy to bring up the subject of a sperm donor with a child who doesn’t have a dad, but it can be harder to broach the subject of having used an egg donor. I actually have to remind myself sometimes to talk to my son about his egg donor because it’s so much easier to forget about her simply because he already has a mom.

Marni first told her child she needed a man to give her the boy parts necessary to have a baby. A while later, she said her girl parts didn’t work very well, so she also needed a woman to give her some of those, thereby building on what she’d previously shared. This approach allows children to get their heads around one idea before introducing another.

When talking to your child about donor conception, it’s also a good idea to equip them with the language they’ll need to explain their family to their friends. Signe has therefore given her daughter standard answers she can give to common questions. For example, “where’s your dad?” would be met with “I don’t have a father. I have a mother and a grandmother.”

Rather than focusing on what your child does not have (for example, a dad), you could describe your child’s family to them to focus on what they do have.

Elena hasn’t explicitly told her daughter about her donor but she does speak about how “in this family, we have cousins, and we have grandparents, and we have Mommy, and we have you. And in this family, we don’t have a daddy. Some families are bigger or smaller. You have a very big family, because you have all these cousins and aunts and people who love you. But there’s not a daddy in this house.”

For Tammy, it’s about helping her son to understand that he’s a miracle. She’s so appreciative of the science and technology that enabled her to have a baby at 45, and she wants to share that with her child.

Different people refer to their child’s sperm donor in different ways. Some prefer to stick with the term donor and others are happy to go with dad. For example, Janice calls her son’s donor his  “donor dad,” whereas Elena prefer to make it clear that there is no dad in the picture. “I never wanted [my daughter] to have the expectation of, ‘oh, maybe there is a dad and he’s away or he’s traveling or something,’” she says.

Christine handles the subject differently still, never saying “we’re missing a dad” or “there is no dad.” Instead she says “we’re a mom-and-kid-and-kid family.” She’s always told her children “as long as there’s love, it’s a family.”

As long as you are open and honest with your child about their donor(s), there is no single right way to talk to them about it. You have to choose the approach that feels most comfortable to you. Just keep your child and their right to know where they came from at the heart of any decisions, start early, and be proud of your family.